The Columns of the Garden District 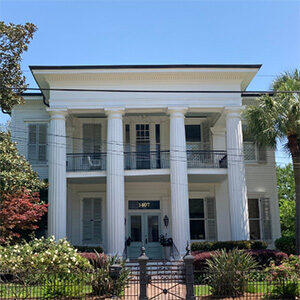 When you are wandering around the iconic and historic Garden District of New Orleans and admiring the many beautiful mansions that line it’s streets, you may notice that the houses have different columns on different floors. Was it just a style of the period? Did it signify wealth or status? Were the architects just out of their minds? We certainly found ourselves wondering, so we did a little digging. 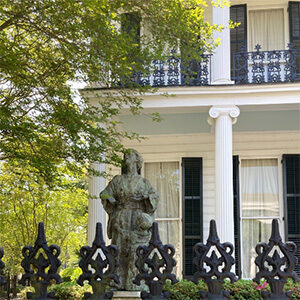 Turns out the architects were not in fact out of their minds, but were rather following an architecture order found in Ancient Greece. An “order” refers to a certain arrangement of parts that have uniform established proportions, regulated by the office each part has to perform (thank you, Wikipedia). Most classical architecture has a certain style that is distinguished by its proportions and details; the easiest way to differentiate between orders is by the type of column employed in the structure.

The three types of columns most readily used by the Garden District architects at the time, around the 1850s-1900s, are the Doric, Ionic, and Corinthian.

The Doric column is recognized by the simple circular capitals at the top member of the column and is the oldest and simplest of the orders. It has no base with a round bottom and a square capital. 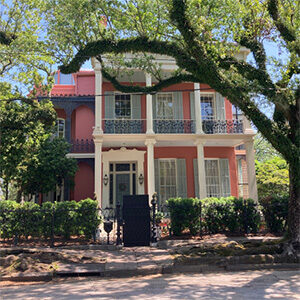 Ionic columns are taller and thinner, with a decorative foot and scroll-shaped volutes on the capital and were developed after the Doric. The Iconic Order is more elaborate than the Doric and has volutes or scrolls that have a carved egg and dart on the curved section.

The most complex is the Corinthian order, which is tall and thin and features a decorative foot, volutes and acanthus leaves on the capital.

Look for these columns on houses like the Dr. Seebold Mansion, aka The Women’s Opera Guild house, located at Prytania and Second Street.