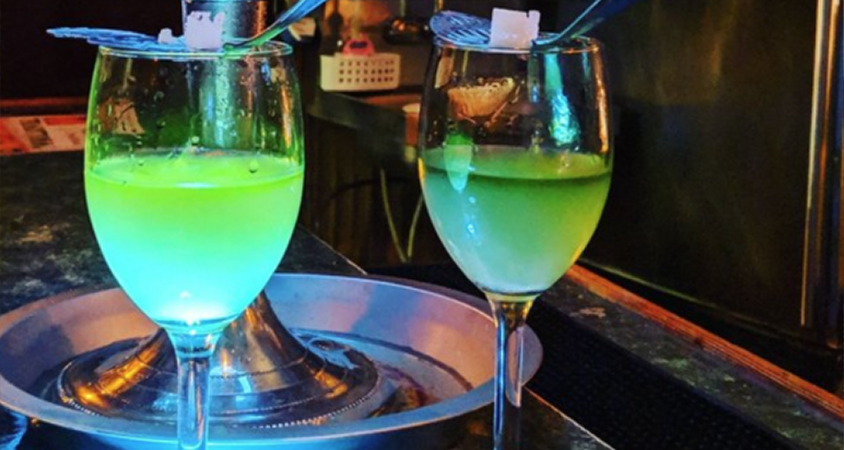 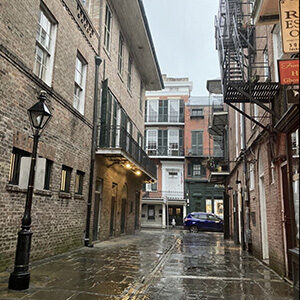 Next to St. Louis Cathedral, in the middle of the French Quarter, you’ll find a quaint alleyway known as Pirate’s Alley. 600 ft long and 16 ft wide, it was through this open walkway that New Orleanians could cut from the Place D’Armes to the Rue de Royale. By 1831, it was paved with the cobblestones you see today, and was called Orleans Alley South, but to the locals, its nickname was the one always used until it was officially changed in 1964.

There are a multitude of legends about this alleyway. From being a place where pirates sold their goods and wares, to passing illegal items through the fence to discreetly paying customers (it was here the phrase “fencing stolen goods” began), to being the location of the jail that once housed the pirate brother’s Pierre and Jean Lafitte.

This jail, known as the Calabozo,was demolished in 1837 and the land sold to make way for a Creole house. Like many old French Quarter homes, this one has been turned into a bar. Pirates Alley Cafe moved into this location in 1998 and has been operated for the last twelve years by Thais Solano & Tony Seville. Thanks to the building’s past as a Creole home it has the unique quality of being able to have a mostly open air bar, leaving little separation between the bar and its surrounding environment of St. Louis Cathedral and cobblestone. 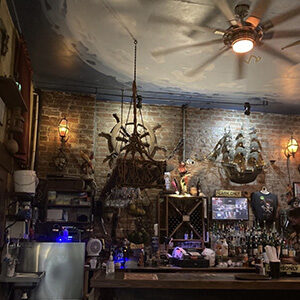 This helps transport you into a bygone era of pirates and debauchery, well not so much a bygone era in New Orleans. What makes this bar so special and such a tourist haunt, other than the fully costumed couple that occasionally sip rum while laughing with locals, is the serving of Absinthe.

Absinthe, or the little green fairy, is a drink made of Wormwood and other hypertrophic herbs which are said to make one hallucinate upon their consumption. Also known as ‘the green fairy’ this anise tasting drink was illegal in the United States until 2007 because of said hallucinations. 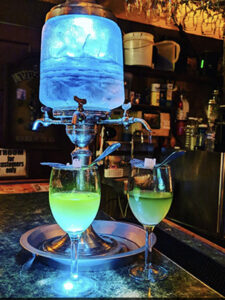 The legend of its hallucinogenic effect goes back to France in the 19th century when there was a large failure of the grape crops. At the time many artists and poets, writers and scoundrels would spend their days joking and creating in the cafes where they drank wine throughout their workday. This was easy to do at the time because the wine was not the wine we know today, it had a lower alcohol content and was typically watered down. So, though by the end of their day the artists were quite drunk, it was easy to drink all day. However, due to the grape failure, one year there was no wine. What were these creatives supposed to drink to help facilitate their genius? That’s when they turned to Absinthe. Absinthe has around 115 proof, meaning it carried a much bigger punch than its watered down bacchanal counterpart. So yes, they did hallucinate, but it was more likely due to alcohol poisoning than the green fairy.

However, Absinthe still has it’s die hard supporters who will tell you that one drink and the green fairy sits with you, two she kisses your lips, and on the third she takes you away to never never land.

If you’ve ever wanted to try this black licorice tasting drink, Pirate’s Alley Cafe is the perfect place to do it. Even if you don’t fly away, the location’s environment and the drink’s effervescence will certainly transport you back in time to when the pirates roamed New Orleans.